CONCRETE PRODUCTS CO. OF SIOUX CITY, 2222 East Third Street, Sioux City, Iowa 51101, an Iowa Corporation,was established in 1946 by George R. Batcheller I as a manufacturer of concrete block. It expanded and began to encompass, not only concrete block, but various other construction products needed by people in the construction and maintenance industry.

The Company is presently managed by G.R. Batcheller II (62) who assumed the position of manager after the untimely death of Mr. Batcheller, Sr.in 1960.

In 1974, the Company constructed a new state-of-the-art automated concrete masonry unit manufacturing plant with one-shift capacity of three million units. Equipment in the plant is continually being updated and in the winter of January 1999, a new $200,000 semi-automatic cuber and automatic splitting line will be installed.This will speed up production and allow easier handling of product as well as produce better splits for Keystone Retaining Wall units.

The year 1988 marked the Company’s entry into the clay brick business and the addition of a very complete attractive architectural showroom called “Brick Heaven” (where all good bricks go).

The year 1992 saw the addition of a complete residential glass block showroom called “THE CRYSTAL PALACE” in order to further the attraction of the residential customer.

In 1991, the Company became a licensee for Keystone Retaining Wall Systems. In 1996, this was extended to encompass the manufacturing and sale of Keystone throughout areas 402, 712, and 515. Don Ronfeldt, Senior Vice President/General Sales Manager, and Kevin Cooper represent Keystone in the Iowa | Nebraska | South Dakota markets. Don Ronfeldt can be reached at 1-800-352-4644 and Kevin Cooper at 515-231-1196.

In 1994, the Company established a retail landscape products division located in a 15,000sq. ft. area immediately west of the Company’s facilities called “Bob’s Backyard.” This seven-day-a-week dawn-to-dusk walk around landscape areas hows a complete line of all colors and styles of landscape products that are available through the Company. Some examples are natural wall stone, clay and concrete paving brick, landscape boulders and other styles of concrete patio products.

The combination of the Company’s “Brick Heaven” showroom, the “Crystal Palace” glass block display, the cultured stone department, and “Bob’s Backyard” landscape area leads the Company’s strategy saying to the new home builder “Don’t you dare build a new home without first coming down and seeing us.” 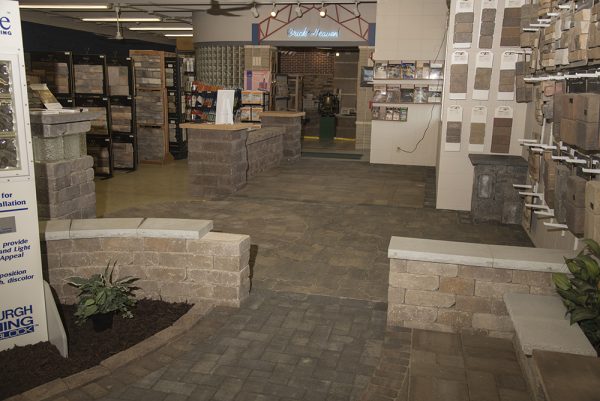